This one day event accompanies the Recalculating exhibition (Triangle Space, Chelsea College of Art and Design, 24th and 27th April 2013) which arises out of an on-going collaboration between CCW Graduate School and the Doctoral School, Academy of Art, Budapest. The collaboration has been sustained by a series of workshops in Budapest and London focussed on sites of historical and contemporary interest. In Budapest, the site of interest was the Csepel Island industrial region of city, which up until the late 1980s was the city’s industrial powerhouse, but has since undergone a period of decline and renewal. This workshop resulted in an exhibition entitled Csepel Works at the Labor Gallery in Budapest, May 2011. In July 2011, a second workshop took place in London that focussed on the institutional legacy, i.e., penal, medical and artistic, of the Millbank site and the Recalculating exhibition is an outcome both of this workshop and the legacy of the collaboration.


The morning session of invited presentations introduces new material into the project that addresses policy change in 19th century regarding art education and mental health and the contemporary function of artistic activity in the Royal Bethlem Hospital. The afternoon session comprises short presentations by the Recalculating artists addressing their contributions to the exhibition.


* PechaKucha 20x20 is a presentation format where the speaker presents 20 images, each for 20 seconds. Where possible, the images advance automatically.
No comments:

Creative writing in response to Recalculating:

Aesthetics of the written word, in contradistinction to artwork and exhibition. 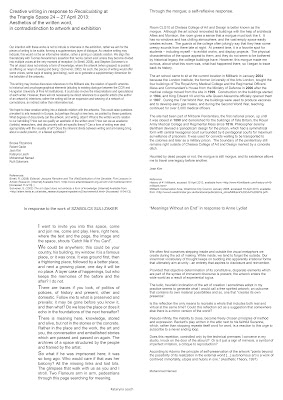 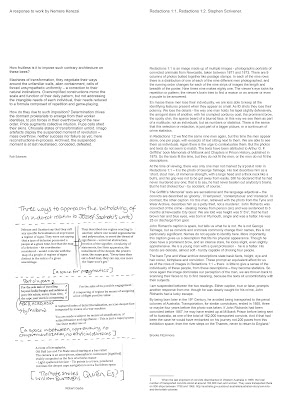 
FLΔG is a group formed at Chelsea College of Art and Design in 2010, comprising of artists, students, former students, staff and researchers. We explore the relationship between art practices, art education, and pedagogy, looking at forms of knowledge production and dissemination in the art school and beyond. FLΔG continues where the ‘educational turn’ in the art world left of, bringing re-examined art/ pedagogy dynamics back into the discursive arena and physical space of the art school, but also by engaging with galleries and related art spaces. FL∆G was named after the room code of the Triangle gallery space, FLG01, with the A of FL∆G being substituted by a triangle, to reference the shape of the Triangle Gallery.

Understanding the Triangle as a very particular physical and discursive site was a key part of beginning to explore the relationship between art educational practices within the academy and the educational turn outside the academy. Site-specific art works, (responding either to the physical site of the Triangle Gallery, to the institutional site of Chelsea or to the discursive site of pedagogy as art) was a fundamental aspect of this project. Both as a way to discursively explore reflection within art practice, as well as an opportunity to explore ideas around the pedagogy of physical, material, artworks in relation to pedagogic theory.

The Triangle gallery is one of the few spaces at Chelsea that the general public has access to. It operates as an educational space, a space for student shows and as an open public space. It is linked through a pathway to the parade ground, adjacent to Tate Britain and we were interested drawing on the public potential of the Triangle as it mediates between the academy and society.

For RECALCULATE FLΔG proposes to show documentation of the re-adjustment of the Triangle Gallery through the inaugural FLΔG project in 2010, as a reflection on this event and to set up a reflexive site, where members of FLΔG will intermittently be present to discuss their work past and present. 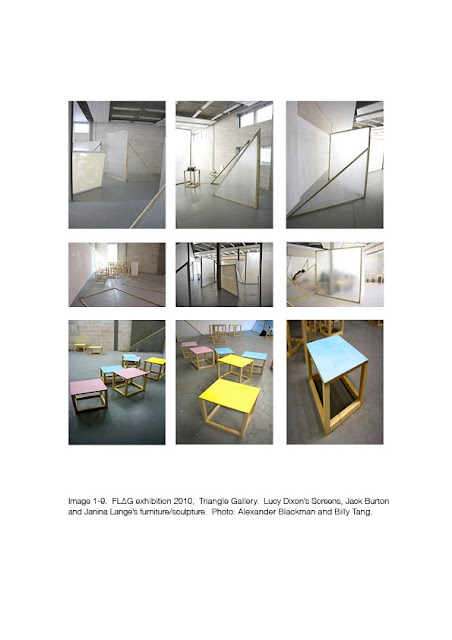 Location: The Red Room, Chelsea College of Art and Design

Since the early nineteen nineties a vigorous international discourse has been underway about the purpose and nature of artistic research. In Britain, this has been accompanied by the widespread introduction into academe of doctoral degrees in art. Whilst, the scope of artistic research is international, many countries have yet to establish doctoral programmes, whilst in others their inception predates the nineteen nineties. Thus approaches to and experiences of doctoral education in art vary markedly between one country and another. The occasion of the Recalcuting* exhibition, which arises out of collaboration between the Hungarian University of Fine Arts, Doctoral School, Budapest, and CCW Graduate School, University of the Arts London, provides an opportunity to celebrate the work of artistic researchers who have successfully completed their degrees, whilst also exploring the affordances and constraints of the institutional regulatory frameworks within which their research was undertaken.

The morning session will contextualise the afternoon session by describing and discussing the frameworks regulating doctoral research doctoral degree programmes at each of the participating institutions. After lunch, recent doctoral degree holders from each school will talk about the research they undertook during their doctoral degrees.

POSTERS FOR THE RECALCULATING EXHBITION AND EVENTS 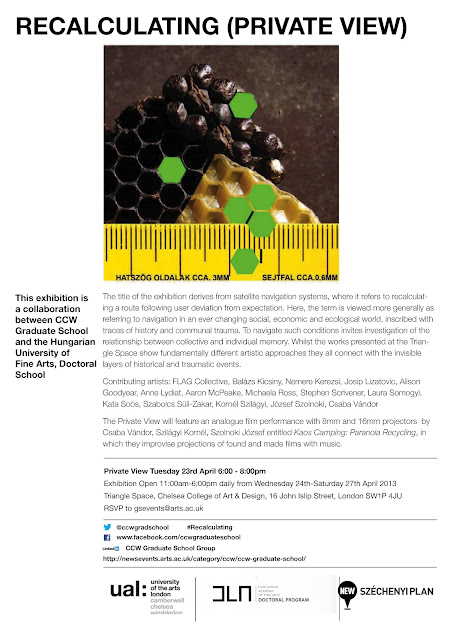 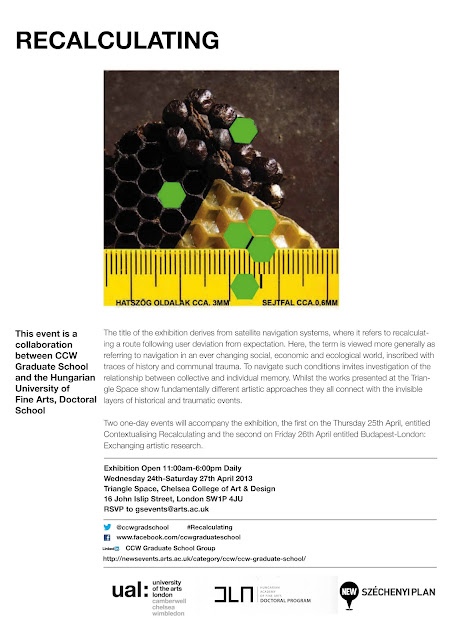 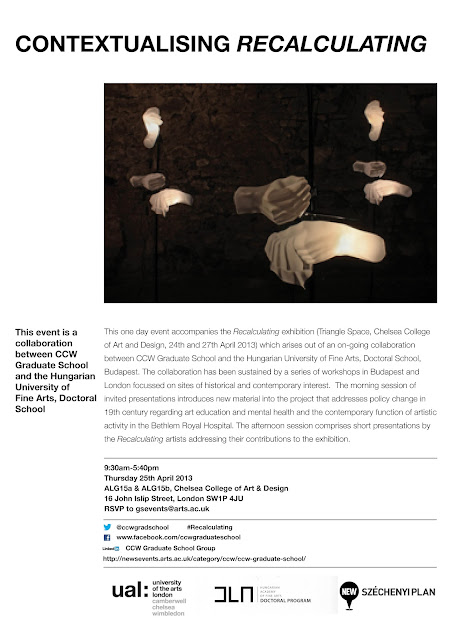 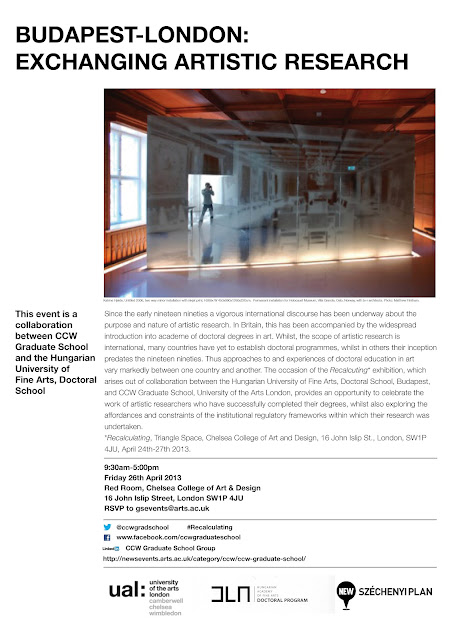 A1 poster and A6 book

In a circular letter to the governors of Her Majesty’s Gaols, dated December 1854 and entitled Photography as an aid to the administration of criminal justice, James Anthony Gardiner, then Governor of Her Majesty’s Gaol, Bristol, argued for the advantages of the use of photography in the administration of criminal justice. The problem, as he saw it, was that there was no way of knowing whether an offender presented to his gaol for the first time had committed a previous crime elsewhere in the United Kingdom. The solution that appealed to Gardiner, and which he recommended to his fellow governors for “general adoption throughout the kingdom”, was the use of photography, because, “I might in scores of cases, even without the knowledge of the prisoner, procure his likeness, a very icon of himself, of which, being capable of multiplication to any extent, I might transmit a copy to wherever it might promise to lead to useful results.”  He went on to describe how, after twelve months of operation, he had perfected a system of photographing prisoners, reporting that by its means he had brought to justice several hardened offenders, who “being unknown in my neighbourhood, would otherwise have escaped with inadequate punishment.” He had achieved these successes by forwarding images of prisoners who had come into his charge to “several places”, thereby obtaining information of their previous convictions elsewhere.  As far as Gardiner was concerned, the photograph provided a means of attaching a set of criminal records to a single offender.

In an article under the heading Photographing prisoners in The Photographic News: A Weekly Record of the Progress of Photography, Volume 10, November 2nd 1866, 524-525, the unidentified author acknowledges the photograph's “literal fidelity in rendering facts” and Gardiner’s ambition “to secure sun drawings of his enforced guests,” solely for the purposes of identification, but then proceeds to read example photographs in terms of what they have to tell us about the individuals photographed: “Not all brutalized, or besotted, or sinister; not all with the forehead villanous low, the square jaw, the coarse mouth, or the eye of wild beast; but in more cases a weak and weary, or a craven and humbled look. Some of the faces remind us painfully of another series of portraits, taken by Dr. Hugh Diamond, of insane persons, and suggest to us the connection between diseased morals and diseased minds, between crime and insanity. Physiognomy, to the careful observer, may often, doubtless, indicate tendencies of character, and suggest phases of mental history. None of the portraits before us look intellectual, or suggest culture; they are mostly of a low type; but there is nothing to suggest the dogged, resisting, vindictive beings, with overhanging felon-brow and sunken cruel eyes, which sensation writers at times attribute to the criminal classes. They are rather examples of God's image degraded and enfeebled by neglect; plants which resemble weeds, because left without culture. The only portrait marked as that of a murderer is that of a weak but not imbecile-looking old man, the mildest in expression amongst a score of criminals."

Whilst Gardiner’s plan was not immediately adopted nationally, enactments were made in the Prevention of Crimes Act, 1871, Chapter 112, 34 and 35 Vict, with a view to the photographing of criminals as a means of facilitating their identification. Many of the thousands of prison photographs demanded under the Act are now held in the British National Archives and have already been copied and uploaded onto web sites, such as Ancestry.co.uk, thus adding to the already large number of mugshot web galleries, blogs, etc., and newspaper articles dealing with the subject. Often the power of this material seems to be what it suggests about the characters of the depicted individuals and/or the times in which they lived.

Redactions 1:1 – 1:2 is a work in two parts that plays with the two ways of reading outlined above: Redactions 1:,1, a poster, invites the viewer to participate in a process of identification (in the gallery space the poster is further redacted such as to present an additional problem to the viewer); Redactions 1:2, a book, plays on the suggestive potential of the juxtaposition of text and image.


I live and work as an artist on an old converted Medway Coaster moored on the River Thames. In this hypothetical space of marginality and transgression I am regarded as ‘living outside the urban edge’, what Michel Foucault calls ‘other spaces’ or ‘counter sites’; …heterotopias which simultaneously represent, compete and challenge, as well as turn upside down actual places… 1


In the final paragraph of a lecture Foucault gave to a group of architects in 1967 entitled ‘Of Other Spaces: Utopias and Heterotopias’ (Des espaces autres), he describes the boat or ship as ‘the greatest reserve of the imagination, the heterotopia par excellence’. He states …as a moving entity, a boat exists outside mainstream society, and therefore embodies a kind of liberty… 2


As a process of mapping the lived experience of being on board ship I have made a series of indexical ink drawings (I am not claiming the drawings are heterotopic - they are traces of emotional and somatic experiences on the ship as a heterotopic space). By suspending a pen from the roof in the hold, I have captured moments of presence now lost, the fleeting, transient rolling of the ship in relation to the wind, and the tide on the female body. Charts that locate my emotional and somatic relationship to a space and place on the river that can never be navigated.


Similar drawings have been made by other female artists despite each being unaware of the drawings of the other. Could there be a link in these artworks that would indicate a gender aware art practice that relates to ‘feminine’ gendered narratives. If so, how might they inform the discourses in relation to the ship as a transgressive space used, occupied and ‘experienced’ by women? 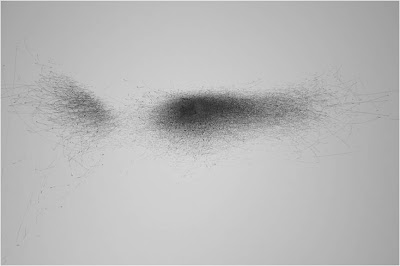 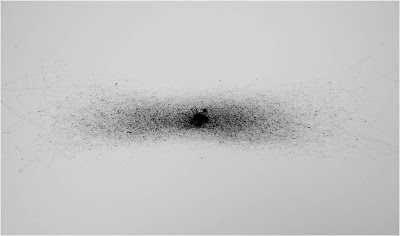